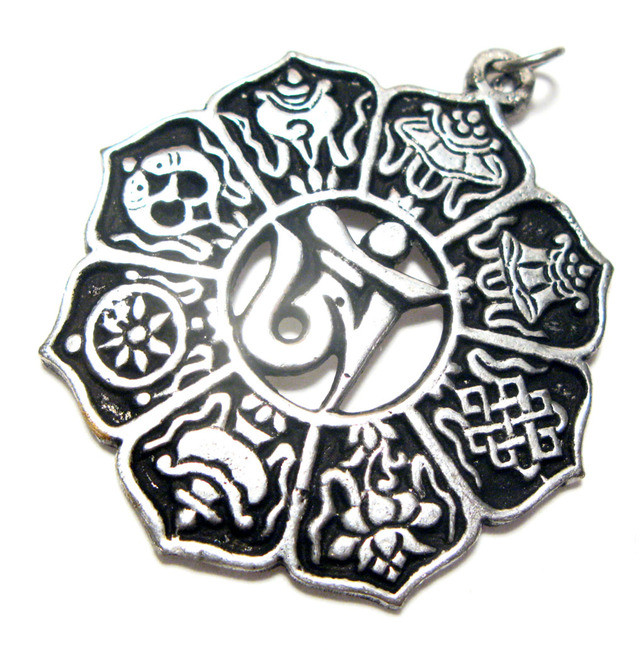 What are 8 Auspicious Symbols and its significance?

The eight good luck symbols, Ashta-Mangala (Sanskrit) or Uljeitu naiman temdek (Mongolian), are popular charms to both the lamas and the Tibetan laity. The qualities of the Buddha are traditionally represented by these 8 auspicious symbols. They were offered to the Buddha Shakyamuni at the time of his birth. The 8 auspicious symbols also commemorate the gifts offered by celestial beings to Buddha Shakyamuni after his attainment of enlightenment. The auspicious symbols appear either all together, in pairs or singly. They decorate all sorts of objects both sacred and secular.

Conch Shell - It coils to the right symbolizing the deep, far-reaching and melodious sound of the Dharma teachings.  It symbolizes the awakening from the deep slumber of ignorance and urges to accomplish our own and other’s welfare.

Parasol - It symbolizes the wholesome activity of preserving beings from illness, harmful forces, obstacles and so forth in this life, and all kinds of temporary and enduring sufferings of the three lower realms, and the realms of men and gods in future lives. It also represents the enjoyment of a feast of benefit under its cool shade.

Victory Banner - It symbolizes the victory of the activities of one's own and others' body, speech and mind over obstacles and negativities. It also stands for the complete victory of the Buddhist Doctrine over all harmful and pernicious forces.

Golden fish – It symbolizes the auspiciousness of all living beings in a state of fearlessness, without danger of drowning in the ocean of sufferings, and migrating from place to place freely and spontaneously, just as fish swim freely without fear through water.

Golden Wheel – It symbolizes the auspiciousness of the turning of the precious wheel of Buddha's doctrine, both in its teachings and realizations, in all realms and at all times, enabling beings to experience the joy of wholesome deeds and liberation.

Lotus - It symbolizes the complete purification of the defilements of the body, speech and mind, and the full blossoming of wholesome deeds in blissful liberation.

Vase - It symbolizes an endless rain of long life, wealth and prosperity and all the benefits of this world and liberation.